Eight months after the United States entered World War II, the Federal Government launched the Manhattan Project, an all-out, but highly secret, effort to build an atomic bomb—and to build one before the Germans did. The task was to translate the vast energy released by atomic fission into a weapon of unprecedented power. On December 2, 1942, a group of distinguished physicists, working under top-secret conditions in an unpretentious laboratory at the University of Chicago, took a crucial step towards this goal: they created the world’s first controlled, self-sustaining nuclear chain reaction. Nobel prize-winning physicist Enrico Fermi directed the experiment.
Fermi directed the construction of a pile of graphite and uranium bricks and wooden timbers, assembled in the precise arrangement necessary to start and stop a nuclear chain reaction. Cadmium rods inserted into the pile regulated the nuclear reaction to prevent it from “burning” itself out of control. Had it not been controlled, the experiment could have released a catastrophic amount of energy, wreaking havoc in the middle of the densely populated city of Chicago.
“We’re cooking!” was the exuberant reaction recorded when the experiment succeeded. (The data shown on these notebook pages is the record of the nuclear reactor’s response to the movement of the control rods.)
(Information excerpted from Stacey Bredhoff, American Originals [Seattle: University of Washington Press, 2001], pp. 94–95.) 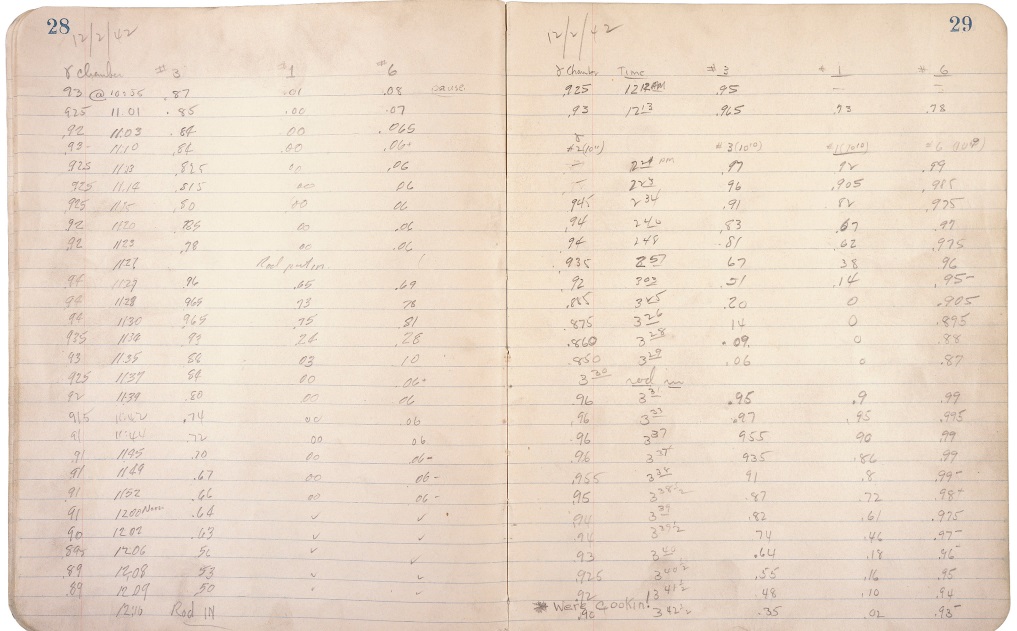